The below models have been discontinued but are occasionally available on a refurbished basis. Call us at 1-877-472-2447 for current availability or click here to request the current inventory.

The Triton 8100 & Triton 9100 deliver Triton’s unparalleled reliability, and offer a number of additional features designed to maximize uptime, such as automatic error recovery. The Triton 9100 also features Triton’s own TDM-100 dispensing mechanism, which incorporates state-of-the- art electronics and a host of features, including locking cassette.

Even though the Triton 9100 features a low cost of ownership, it still incorporates many of the industry’s tightest security features, such as VISA Encrypting PIN pad (VEPP) and Triple DES, the new standard for PIN encryption.

From the leader in off-premise ATMs, the Triton 9600 series has become the ATM solution for thousands and thousands of retail locations throughout the United States, Canada, and Mexico. This brilliantly engineered ATM is completely upgradeable to allow for new feature enhancements as needed. Everything you could possibly want in an ATM is available to you from Triton. Standard equipment includes thermal printer with graphics capability, dip card reader and swipe, tactile feedback keyboard with integral Braille, electronic journal, and a backlit LCD customer display (color optional) with 320 X 240 dot resolution. Optional features: full-color high-resolution display for advertising and graphics, high security locks and alarms, up to four cassette capacity, multimedia dispensing capabilities – phone cards, stamps etc.
Triton 9500 was the predecessor to the Triton 9600

As the leader of the off-premise ATM market, we have learned that while most retail operators would like to have a full-service ATM in every location, not all stores have the traffic to justify one. In response to this need, Triton has developed the Triton Mako – to provide the lowest cost of ownership available in the ATM market today, making ATMs feasible for lower volume retail and banking locations.

In addition to many great features, Triton Mako offers a bundle of three different advertising opportunities that can help you promote profitable products or generate additional income by selling ad space. Plus, you can change ad screens and manage all aspects of your Triton Mako remotely through Triton Connectª ATM Management Software.

Low Cost – Big Capability! The Triton 9000 mini, cashless ATM brings electronic banking to virtually any retail consumer location. Priced at a fraction of the installed cost of a full function ATM, and without the recurring cost of cash replenishment, it offers a very low cost alternative in proven ATM locations. If also offers attractive, new opportunities in retail locations where traditionally checks are not accepted. It’s easy to use and it’s faster than online POS. It can support other banking functions such as account inquiries and transfer of funds. 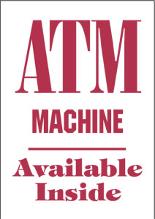